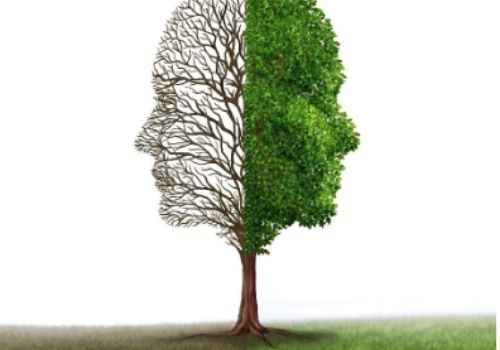 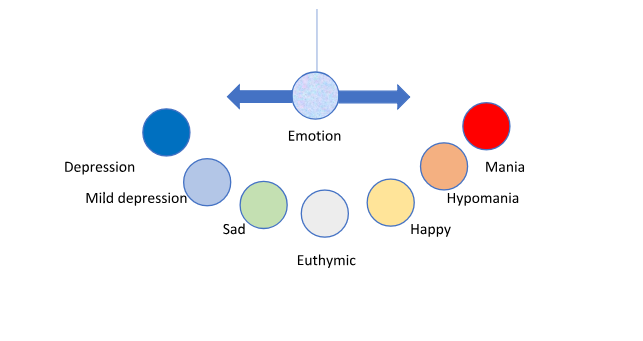 In individuals who do not have a mood disorder the pendulum gradually swings from happy to sad and is usually in response to external events, such as feeling really good after getting a promotion at work or feeling really low after an unwanted break-up. These emotional states are usually temporary and a person’s mood eventually returns to a more neutral state. In Bipolar Disorder the pendulum can swing to extreme emotional states where sadness becomes depression and happiness becomes mania. The rate at which the pendulum swings can be rapid and can get stuck at either emotional extreme where it seldom returns to a euthymic state (a resting state in which there is no emotional extreme). External events can contribute to these severe emotional swings or they can be experienced for no obvious reason.

There is an additional emotional disorder (see above graphic) called Cyclothymia that falls in between the “normal mood” range and Bipolar Disorder. Individuals who have Cyclothymia have moods that range from mild depression to hypomania and, similar to Bipolar Disorder, the changes in mood can be rapid and can get stuck at either emotional extreme.

Listed below are some of the symptoms of depression, mild depression, Mania, and Hypomania.

As explained by the above graphic and list of symptoms, individuals with Bipolar Disorder are continuously trying to manage emotional extremes, which can be an exhausting and lifelong battle. It is not as easy as simply willing oneself to “cheer-up” or “calm-down.” Bipolar Disorder frequently has a negative effect on employment, school, developing and maintaining relationships, and overall self-care. Learning to manage the symptoms of Bipolar Disorder is essential to improving one’s confidence, relationships and overall quality of life. Learn more about managing Bipolar Disorder by meeting with a licensed therapist who specializes in treating affective disorders.

NAMI Barrington Area Board of Directors

We are an affiliate of NAMI, the National Alliance of Mental Illness. Our affiiate was established in 2006, and as the blades of grass in the NAMI logo symbolize, we are a grassroots organization comprised of families and individuals whose lives have been affected by serious mental illness.

Our mission is to improve the lives of individuals and their families affected by mental illness through support, education & advocacy.